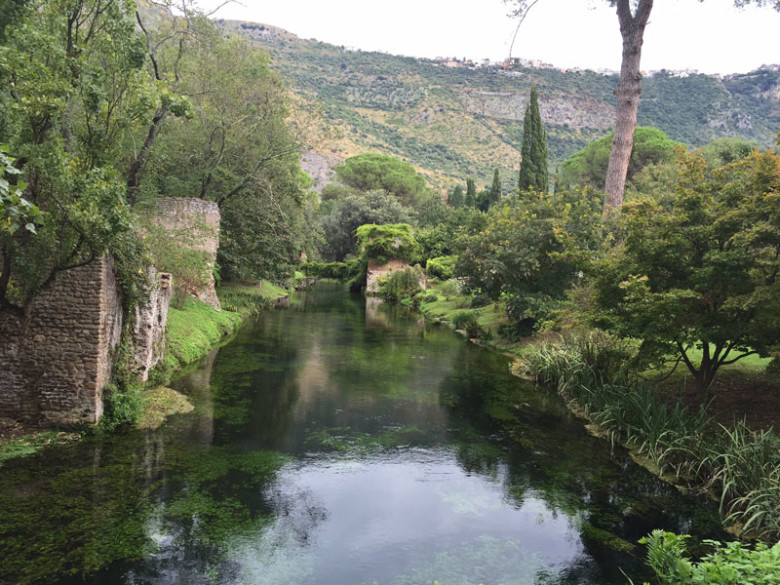 Starting from your lodge in Rome with your Personal Driver going to the just declared 2015 best garden of Italy,after about 1 hour and half of travelling.

Ninfa Gardens claims the title of Natural Monument by the Lazio Region in 2000 in order to protect the historic garden of international repute, the habitat consists of the river Ninfa, the surface of the lake formed by it and the surrounding areas which are the natural frame of protective ‘entire complex, in which also includes the Natural Park Pantanello, inaugurated on 15 December 2009.

The name comes from a nymph temple from Roman times, dedicated to the nymphs Naiad, gods of spring water, built near the present garden.
Since VIII Emperor Constantine V Copronymus granted to Pope Zacharias this fertile place, part of a larger area called Campagna and Marittima, it became part of the pontifical administration. At the time there were only a few people, but it had taken on a strategic role for the presence of the Via Pedemontana: lying at the foot of the mountains Lepine, was the only link to the outside Rome that led to the south when the Via Appia was covered by swamps. After the eleventh century Ninfa assumed the role of cities and between the various families who ruled the Counts Tusculum remember, related to papal Rome, and frangipani, which flourished under the city architecture and raised the consideration of economic and political Ninfa, We should be remembered that in 1159 Cardinal Rolando Bandinelli Pope Alexander III was crowned in the Church of Santa Maria Maggiore. In 1294 he became Pope Benedict Caetani, Pope Boniface VIII, ambitious and powerful figure, who in 1298 helped his nephew Peter II Caetani to buy Ninfa and other neighboring cities, marking the beginning of the presence of the Caetani in the Pontine area and Lepine, presence that would be during seven centuries.
Peter II Caetani enlarged the castle in the city, adding the curtain wall with the four forts and raising the tower, already present, to 32 meters, and built the baronial building.

Admission is regulated only by guided tours, without reservation, with departures every ten minutes.

– The tour takes about an hour and at its end you can not restrain himself in the garden, but you can visit the Hortus conclusus, an Italian garden dating back to the seventeenth century, the plant regularly, characterized by citrus trees and ponds with swans.

– Remember that within the Garden is not packed lunch or take a picnic. Near the garden there are bars or houses.

– Guided tours are guaranteed even in case of rain.

SERVICE OFFERED ONLY WITH CAR HIRED AND PROFESSIONAL DRIVER ,NOT WITH GUIDE LICENSED AND TICKETS.YOUR PROFESSIONAL ENGLISH SPEAKING DRIVER WILL GIVE YOU ONLY BASIC HISTORICAL INFORMATION FROM INSIDE THE CAR, SINCE ITALIAN LAW DOES NOT PERMIT HE EXPLAINS FROM OFF THE VEHICLE.

Private licensed tour guides are not employees or affiliates of  Romelimo.cab (affiliate of AIM LIMO ROME) as they operate independently.  We only place reservations for private tour guides on behalf of our clients as a courtesy service. We receive NO COMMISSION about it in any way from the tour guides for booking their services. We recommend their services based on their lawful tour guide qualifications, expertise, and professional standing.